I want to make 1000 requests! How can I make it really fast? Let’s have a look at 4 approaches and compare their speed.

In order to test different methods of handling requests, I created a very simple ASP.Net Core API, that return user by his id. It fetches them from plain old MSSQL database. 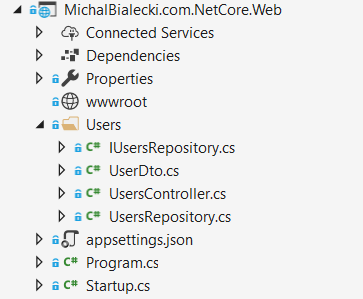 I deployed it quickly to Azure using App services and it was ready for testing in less than two hours. It’s amazing how quickly a .net core app can be deployed and tested in a real hosting environment. I was also able to debug it remotely and check it’s work in Application Insights.

Here is my post on how to build an app and deploy it to Azure: https://www.michalbialecki.com/2017/12/21/sending-a-azure-service-bus-message-in-asp-net-core/

And a post about custom data source in Application Insights: https://www.michalbialecki.com/2017/09/03/custom-data-source-in-application-insights/

So the task here is to write a method, that would call this endpoint and fetch 1000 users by their ids as fast as possible.

I wrapped a single call in a UsersClient class:

Asynchronous programming in C# is very simple, you just use async / await keywords in your methods and magic happens.

This is because although it is asynchronous programming, it doesn’t mean requests are done in parallel. Asynchronous means requests will not block the main thread, that can go further with the execution. If you look at how requests are executed in time, you will see something like this:

Running in parallel is the key here because you can make many requests and use the same time that one request takes. The code can look like this:

WhenAll is a beautiful creation that waits for tasks with the same type and returns a list of results. A drawback here would be an exception handling because when something goes wrong you will get an AggregatedException with possibly multiple exceptions, but you would not know which task caused it.

This is way better than before, but it’s not impressive. The thing that slows down the process is thread handling. Executing 1000 requests at the same time will try to create or utilize 1000 threads and managing them is a cost. Timeline looks like this:

The idea here is to do parallel requests, but not all at the same time. Let’s do it batches for 100.

This is the slightly better result because framework needs to handle fewer threads at the same time and therefore it is more effective. You can manipulate the batch size and figure out what is best for you. Timeline looks like this: 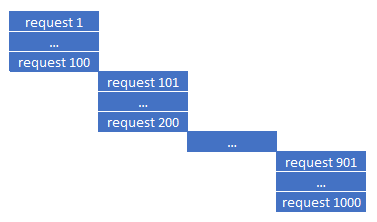 The proper solution needs some modifications in the API. You won’t always have the ability to change the API you are calling, but only changes on both sides can get you even further. It is not effective to fetch users one by one when we need to fetch thousands of them. To further enhance performance we need to create a specific endpoint for our use. In this case – fetching many users at once. Now swagger looks like this:

and code for fetching users:

Notice that endpoint for getting multiple users is a POST. This is because payload we send can be big and might not fit in a query string, so it is a good practice to use POST in such a case.

Code that would fetch users in batches in parallel looks like this:

Yes, less than one second! On a timeline it looks like this:

Comparing to other methods on a chart, it’s not even there: 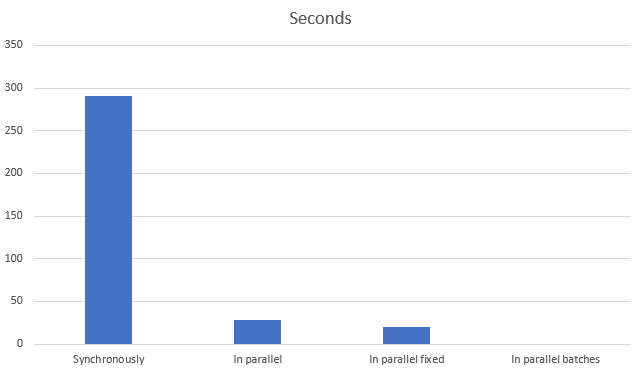 How to optimize your requests

Have in mind, that every case is different and what works for one service, does not necessarily need to work with the next one. Try different things and approaches, find methods to measure your efforts.

Here are a few tips from me:

You can find all code posted here in my github repo: https://github.com/mikuam/Blog.

29 thoughts on “How to send many requests in parallel in ASP.Net Core”