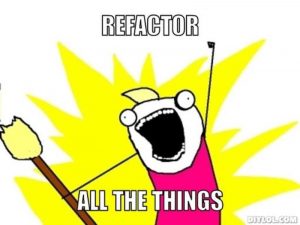 Recently in my team at work, we focus on maintaining older micro-services. While this might not be the most exciting job to do, it is an opportunity to work on a developer craftsmanship. A micro-service or any code that you write, can be old after a year or even a half, cause our developer habits changes. Not only technology goes forward, but we tend to use different nuget packages and in result write the same code in a different way.

Refactoring, which I’m referring to in this post, can be playful, can be fun, but it needs to be done with caution. And foremost, we cannot go too far with it, cause drawing a line here is not a child’s play.

Here is a very simple API that fetches a user from the database and fills in his description from a different REST service. Code is written in .Net Core.

As you see it almost looks as a rookie developer might write it, but it’s not that bad – configuration is injected with an interface IConfiguration.

What is bad here?

Have a look at projects structure – it is really minimal: 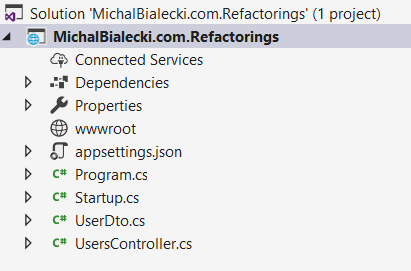 Those are the most obvious things that should be fixed. Let’s go step by step.

Database and REST calls should have it’s own classes

So I moved that to separate classes and this is how controller looks like: 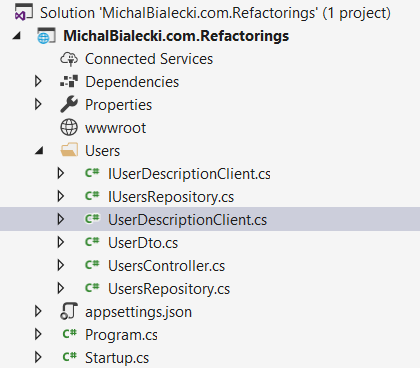 This is a level of refactoring that I feel comfortable with. The code is nicely decoupled, easy to test and read. However, as a project gets larger you can refactor more to have a more shared code. If you then jump to a small project, you might want to do things ‘the right way’, so the code is ready for future. You will use your best approaches from previous projects – but isn’t that going too far?

First thing I did is create a base class for my UserDescriptionClient:

And UserDescriptionClient now gets very simple:

We also can add more layers – there has to be a service between controller and repository. 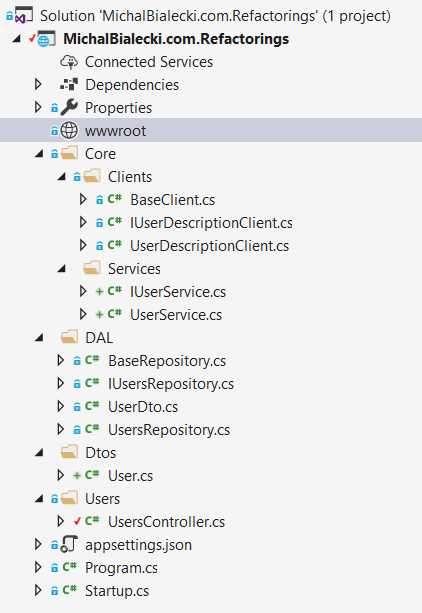 And I just got started. There is actually much more that you can do:

It all depends on your imagination, but notice one thing – it didn’t actually add value to the project. 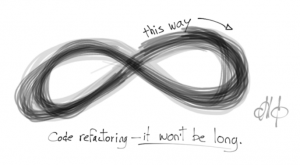 My refactored project is better designed and decoupled, but you never know which direction project might go. It is a threat when implementing completely new micro-service. You can implement whatever you want in the beginning, but you want to implement as much as possible so that the next developer will have an easier job to do. But would it be really easier? Trying to figure out why you wrote so much code for such a little value. In fact reading and understanding bigger project just takes more time than it should.

Did I get too far with refactoring? What do you think?

You can find code posted here on my GitHub: https://github.com/mikuam/MichalBialecki.com-refactorings

One thought on “The urge for refactoring”